Earlier this summer I received a telephone call from Mike Thomas requesting if I was able to make a birds nest out of willow. It had to be large enough for two children or one adult to get into to have their photograph taken. Always up for a challenge, I said I would have a go.

A week later, we met at Pine Lodge Gardens, St. Austell, to discuss requirements. The nest was to be placed in one of the ten gardens situated within the thirty acre grounds. These theme is the mythological bird called the ‘Soul Bird’. The represents our soul and its emotions, joy, sadness, happiness etc,. Visitors will open drawers to find the Soul Bird’s secrets and it is an adventure for both young and old alike. There is also ‘The Hidden Gardeners: worms, Beatles and other bugs and birds. All of whom, dig and fertilise the soil. This is all told with various activities. The ‘Nest’ will be for the visitors to lie in and pretend to be whatever bird they wish. The whole venture is about involving young and old, in the garden and its secrets.

After hearing Mike explaining the project, I was eager to take on this commission and work out how I was going to tackle getting the nest started. I sought Carol (Horsington’s) advice on this. Carol suggested I used a coracle design and starting with Mouthwale weave. I bought some sturdy green willow sticks from Carol and went home to,lay out a six foot diameter circle. After much huffing and puffing and a few expletives, Paul (my husband) and I managed to secure a robust shell. It was then just a coarse of random weaving. Below is a photograph of the nest, with me in it, to show Mike the sturdiness of it. 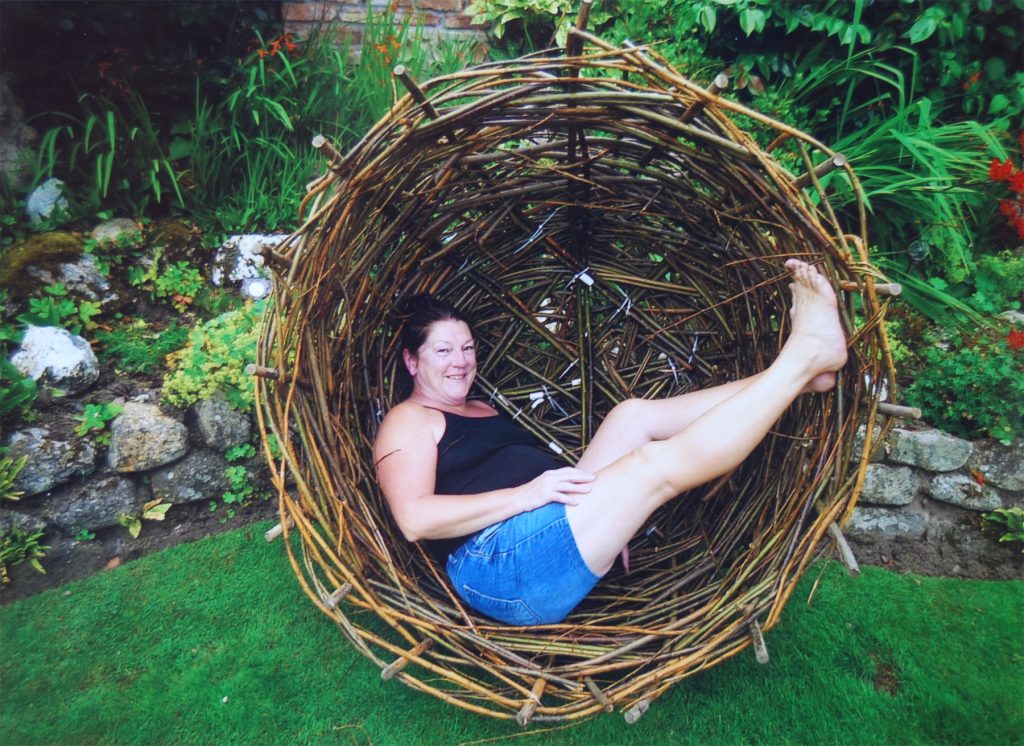 The nest has been delivered to Pine Lodge and I am now awaiting a call to tell me that it has been set in place in its appropriate garden.

By the way, I recently received a call from Mike telling me that it might be a dragonfly next!!